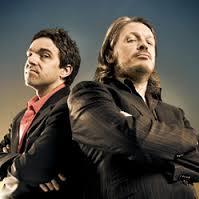 The Collings and Herrin Podcast was a humorous topical podcast starring comedian Richard Herring and writer/broadcaster Andrew Collins. In 2005-7, Richard was a regular on Andrew's weekly radio show, where their natural chemistry became clear; after losing the slot, they decided to continue reviewing the papers independently, record it in Richard's loft and release it for free through the British Comedy Guide

Between February 2008 and June 2011, they released an episode nearly every week, expanding into live gigs around the UK. The normal length was just over an hour, but some episodes ran for much longer, depending on the recording device. During this time they also spent a year filling in for Adam and Joe, under the more professional title of Collins and Herring.

The podcast came to an end when Andrew accepted an offer to return to that slot with another comedian and mutual friend, Josie Long. Richard was upset and a hiatus was announced, with both sides opening up online

. They tried to reboot in November 2011, but the reunion lasted only one episode before Andrew apparently called it quits.