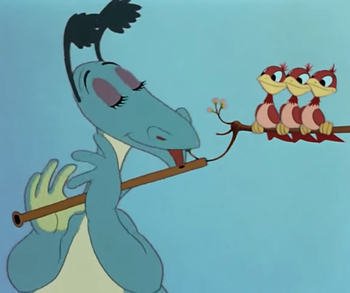 "Now, in our story, the characters are represented by instruments in the symphony orchestra—for instance, the bird by the high sounds of the flute."
— Itzhak Perlman narrating Peter and the Wolf
Advertisement:

The songbird — from forests and woodlands around the world, the tweeting of birds is an instantly recognizable sound for anyone familiar with the outdoors. The high pitch of their calls puts them in a similar range with flutes, sometimes piccolos. As such, it's only natural that when composers wish to represent birds in music, they most often turn to the flute, giving it a generally light, jaunty tune that flitters about in a way reminiscent of the beating of small wings and tweeting.

The one common orchestral birdcall least associated with flutes, though often heard with flute/piccolo birdcalls in counterpoint or in succession, is the cuckoo's descending third or fourth, which is usually scored for the clarinet.