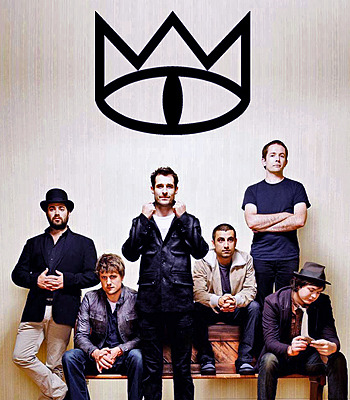 Welcome to the empire and the funky empire tunes.

Our weapons were our instuments
Made from our timber and steel
We never yielded to conformity, but stood like kings
On a chariot that's riding on our record wheels.
— from The Chariot

on their self-titled debut album
Advertisement:

The Cat Empire is an Australian latin/jazz/ska/funk/indie band formed in 1999. It began as a trio, composed of Ollie McGill, Felix Riebl and Ryan Monro, spawned from the nine-piece group Jazz Cat. After gigging around the Melbourne jazz scene, the band grew in 2001, with the other present day members joining.

Known for their energetic live shows, the band has achieved critical acclaim both in Australia and abroad.

The Empire Horns, a brass duo who accompany the band, consist of;

This band and their music provide examples of: