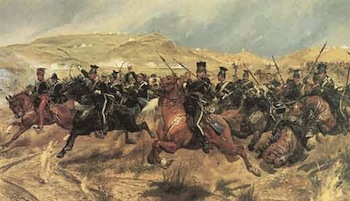 C'est magnifique! Mais ce n'est pas la guerre, c'est la folie.note "It's magnificent! But it's not war, it's madness."
"'Forward, the Light Brigade!'
Was there a man dismay'd?
Not tho' the soldier knew
Someone had blunder'd:
Theirs not to make reply,
Theirs not to reason why,
Theirs but to do and die:
Into the valley of Death
Rode the six hundred."
—Alfred, Lord Tennyson, The Charge of the Light Brigade
Advertisement:

The Crimean War was a war fought from 1853 to 1856 between the Russian Empire on one side and an alliance consisting of the British Empire, the French Empire (no not that empire — his nephew's), the Kingdom of Sardinia, and the Ottoman Empire (today's Turkey). It also counts as the 13th of Russia's 16 wars with Turkey (the first stemming back to the mid 16th Century)

Sometimes known in Britain as the Russian War.

This all started when French Emperor Napoleon III induced the Ottoman Sultan Abdulmecid I to recognize France as the protector of the Christian peoples in Ottoman Palestine (which at the time meant the whole eastern shore of the Mediterranean: not just modern Israel/Palestine, but also Lebanon and bits of Syria and Turkey). This, of course, did not sit well with the Russian Tsar, Nicholas I (not the other Nick), as it had the practical effect of favoring the Catholic communities of the region (particularly the Maronites of Lebanon) over the various Eastern Orthodox communities of which Russia regarded itself as the natural protector. As a result, Russia sent troops to the Ottoman-controlled Danubian Provinces (in today's Romania), forcing Abdulmecid to declare war on Russia. A surprise attack on Turkish ships in the Battle of Sinop drew Britain and France into the war. The Kingdom of Piedmont came in for reasons unclear to everyone but its Prime Minister, Count Cavour.

The war was fought on three fronts. The major front was the Danubian Front, fought in the Balkans (mainly Romania); the Black Sea and the Crimean Peninsula are the other two. The name of the war comes from the fact most of the fighting was in the Crimea, particularly in the port city of Sevastopol, which was besieged by the Allies for almost a year before the Russians surrendered.

Other fronts were the Caucasus Campaign (fought mainly in Armenia and Northwestern Turkey), with its major battle being a 5-month siege in Kars, and the Naval Campaign (fought in the Baltic and White Seas as well as the Pacific Ocean) which saw no major fleet action, because outnumbered and outclassed Russian fleet mostly stayed in protected bases (France and Britain already turned a significant parts of their previously-sail fleets to steam propulsion, while Russia only started to)

A major cultural touchstone is the Charge of the Light Brigade during the Battle of Balaclava (25 October 1854). Over six hundred English cavalry, following ambiguous instructions misdelivered, courageously charged a heavily-defended Russian outpost and suffered massive casualties. Tennyson wrote a poem about it. On the other side of frontlines, we have the long and heroic defense of Sevastopol, which became a major point of pride for both Russian military and culture (Tolstoy wrote his "Sevastopol Sketches" about it), and sucsessful defense of Petropavlovsk-Kamchatsky, where small Russian garrison and volunteers sucsessfully routed much stronger Franco-British landing force.

In the end it was an allied victory. The resulting Treaty of Paris (the first since The Napoleonic Wars) gave the Danubian Principality of Moldavia the Budjak, both Moldavia and Wallachia autonomy (to be monitored by the victorious powers; this set off the final chain of events culminating in the official formation of Romania a few years later) and demilitarized the Black Sea (and, unimportantly, the Russian-controlled Åland Islands in Finland).

Russia's setback also instituted greater reforms in the military, which would be put to good use when they fought Turkey again 20 years later. The British military also underwent drastic reforms after their poor performance in this conflict (the aforementioned Light Brigade fiasco in particular having drawn enormous criticism, even if the actual charge was seen as heroic at the time), especially in medicine, sanitation and officer selection.

Recent historians (Trevor Royle, Orlando Figes) argue that the Crimean War had farther-reaching impact than is generally thought, even beyond medical and military reforms. The unification of Italy was an indirect result of the Piedmontese Kingdom's participation in the war (see below). The blocking of Russian expansion into Eastern Europe, and waning of Austrian power, left a power vacuum which was ultimately filled by a soon-to-be-unified Germany. Turkish nationalism was also stirred by their role in the conflict. All of these had drastic consequences a few decades later. It was also the first time in the "modern" era that France and Britain cooperated heavily in a military conflict, which was particularly notable as a few decades prior, the two had been at each other's throats as primary belligerents in the greatest war the world had yet known, and even before that had been bitter enemies for centuries. The earliest seeds of what would eventually become the Allies of the World Wars and later NATO were probably planted in this conflict.

In more recent times, the conflict has received renewed interest thanks to another war

concerning Crimea, this time between Russia and Ukraine.

The Crimean War in fiction: