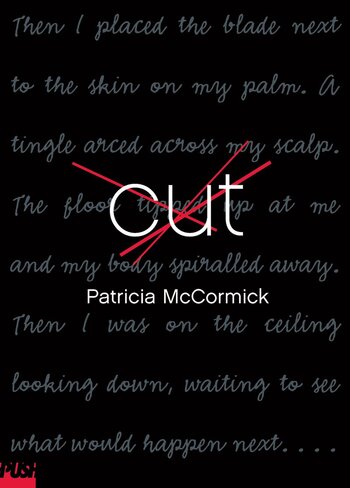 Cut is a young adult novel written by Patricia McCormick.

The heroine, Callie, cuts herself. The discovery of this particular habit by the school nurse has led to her admission to Sea Pines, an all-female psychiatric hospital that is called a "residential treatment facility" by the staff there. The patients are called guests and are sorted according to their issues. Those who have been admitted for treatment of eating disorders are called "guests with food issues." Junkies and alcoholics are "guests with substance issues" and the guests with behavioral issues are "assorted psychos," as Callie herself puts it. Guests are further sorted by Level based on behavior. Level Ones are new guests or guests exhibiting Inappropriate Behavior and are not allowed to go anywhere without an escort. Level Twos are guests who have accumulated ten points for Appropriate Behavior and are allowed limited privileges. Level Threes are guests who are about to graduate and "are the escorts." The nurses are not called nurses, they are called attendants.

The entirety of this novel is written in second person, with Callie narrating to her psychiatrist, who she is required to see for Individual Therapy, which is basically set up to follow the traditional format of a Freudian psychotherapy session. The doctor sits on a chair with a sheet of paper and pen in hand while Callie sits on the Freudian Couch and... doesn't say a word. Callie, as well as cutting herself, has also remained completely mute for quite a while to the point where her roommate has nicknamed her S.T., for "Silent Treatment." Still, the reader finds out, little by little, exactly what Callie's psychological issues are.