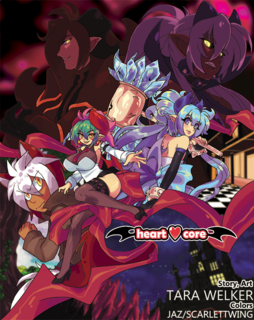 is a web graphic novel by T.L. Welker

about Amethyst Lashiec, a Fiendlord and princess of Asgar that grew disdainful of her father Royce's methods and decisions ever since the end of the demons' war against the beastmen. Royce, likewise, becomes fed up with his daughter's rebellious attitude and strips Ame of her rank and inheritance and promises the other Fiendlords that the one to bring him the ex-princess' head will become the new heir to the throne, before Ame can try to overthrow him.

As of late 2013, the first few chapters are being remade since the author wants to make improvements to the story both in terms of writing and drawing. Many of the older pages can be found in her DeviantArt page linked above.

Has very little to do with Heart Drive.