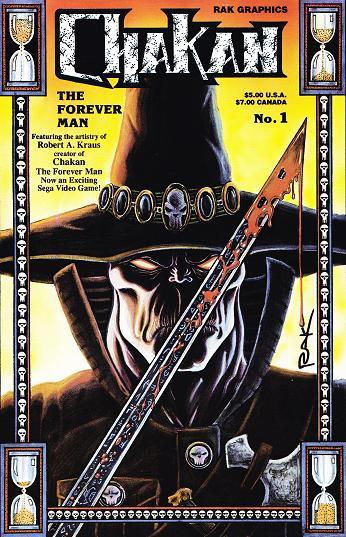 Chakan: The Forever Man is a comic series made by RAK Graphics that was made into a Sega Genesis video game. It tells the story of Chakan, a sorcerer and a warrior of great skill that was so unbeatable, he declared that Death himself would not be able to beat him. Death, upon hearing this made a deal with Chakan. If Chakan wins, he gets eternal life, but if Chakan loses, his soul belongs to Death for him to do with as he wishes. Chakan accepts and the two did battle. Eventually, Chakan won the fight and was granted his gift. However, this gift turned out to be a curse as Chakan's visage was made to match that of Death's, and he is in constant torment by the visions of evil. If Chakan destroys all the evil in the physical and elemental planes, only then would he be granted eternal rest.

Chakan: The Forever Man the video game is notorious for being incredibly difficult, with unforgiving platforming elements and enemies that seem to come out of nowhere. However, it has won itself a small, yet devoted, fanbase.