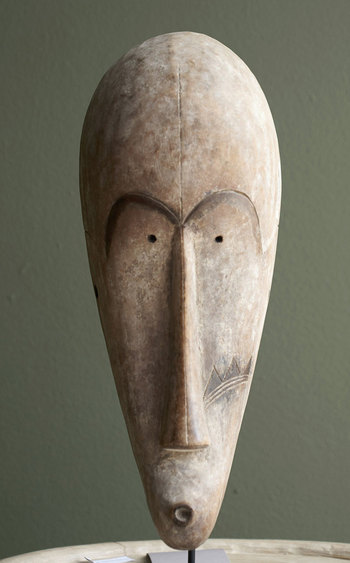 Fang Ngil mask.
"I sow the wind! (Yes!) I shoot the elephant! (Yes!) Let the ears listen! (Let them hear the Mvet!)"
— Opening formula of the Mvet epics
Advertisement:

The Beti-Pahuin or Fang-Beti peoples are a Central African group of Bantu speakers with mutually intelligible languages, a common culture, and shared ethnic origin. They historically spanned an area from the Republic of the Congo in the south through Gabon, Equatorial Guinea, and Cameroon in the north. Since the time of Portuguese rule there has been a population in São Tomé & Principe as well. Traditionally they lived as patrilineal farmers organized into clans led by paramount chiefs. Their heavily stylized artwork was brought to France and became a major influence on the avant-garde primitivist and modernist art movements. One notable admirer of Fang artwork was Pablo Picasso during his time in Paris.

Traditional myths and legends were sung with the accompaniment of a stringed instrument called the Mvet. Bards would be initiated over a long period of study and ritual by a master that taught them the lore of the people. The legendary first Mvet player was a man named Oyono Ada Ngone. In the ancient land of Engong the great patriarch Ekang Nna had a daughter named Okome Ekang who he adored so much he refused to let her marry so she would remain free with him in Engong. Okome Ekang was so breathtakingly beautiful that many men and spirits vied for her hand. Her nickname was “Ada Ngone” or Beauty of Beauties. She eventually attracted the attention of a powerful man named Zogo Bikuku “Uproar of the arachnids” from the Yemebett tribe in Oku. His nickname was ”Bifouga Zeeh” or ruffle beard because of the long facial hair he had to drag behind himself. Ada Ngone politely refused his marriage offer and became his lover instead. They had two sons together: Oyono Ada Ngone, and Ebe Okone.

Ebe Okone went on to found the smallest clan in Engong while Oyono Ada preferred the bachelor life as a wandering warrior and musician. Oyono Ada was tall, athletic, sharp eyed, and handsome. His warriors considered him invulnerable. Before each battle he would roar which summoned thunder and swirling rain storms that disoriented his enemies while he decapitated them. His storm powers fill the Mvets and the warrior Ntoutoume Mfoulou is often compared to him later. Oyono frequently prayed to Nzame or God before battle. While he led his warriors they weren’t sure where to travel next after leaving Lake Atok Ening (Lake of Life). So they joined the peoples at the Bingouara River Valley where it was feared he would become lost on the magic sea “Mang Bekon Be Bininga”. Shortly after a skirmish Oyono Ada fell into a mysterious coma. The people cared for him while he was unconscious for months. During that time Oyono was sent visions of the dawn of time to now by the ultimate manifestation of God, Eyo. Eyo showed Oyono how to create the Mvet. Oyono was tasked with singing the tales of the elder days to inspire hope and courage in the hearts of the Beti-Pahuin people as they marched into their new homeland and battled enemies. He would sing to them about the seemingly endless clashes between the immortal Ekang warriors in the southern land of Engong against the wily mortal sorcerers of Oku in the North.

The central conflict of the “Mvet Ekang” cycle between the men of the Yendzok tribe in Engong (better known as the Ekang for their progenitor) and Oku is over the jealously guarded secret of immortality which the Ekang are able to exploit, making them the most powerful tribe in the world. The Ekang are giants who call themselves the Iron Men. The tribes of Oku are highly diverse but share the aim of wrestling control of immortality from Engong through sorcery, trickery, and champions capable of challenging the immortals.

The Beti-Pahuin epics take place in a primordial world very different from the Africa we know now. The world of Mvett is composed of four main geographic areas:

Nkourou Megnoung Eko Mbegne: This is the region located in the far north of the Mvett world. It’s known as the far foggy drum country.

Etone Abandzic Mekok Engone: This is the eastern region. This is where life and its great mysteries were born, as well as human beings. This region is where Oyono Ada Ngone heard the voice of Eyo and that he had the supreme revelation. This region is also very rich in rivers, mountains, and gigantic trees.

Edoune Nzok Amvene Obame: This is a region located to the west. It is a territory rich in powerful men, but apparently quieter than others because many of Engong's warriors are the nephews of men in this region. It’s named “Rotting elephant carcass” as the implication is it’s so prosperous an elephant can live to a ripe old age.

Engong Nzok Mebeghe Me Mba: Called Engong for short, it’s located in the far south of the region, this realm is occupied by the immortals who created their country there. It is inhabited by the descendants of Patriarch Ekang Nna. The quintessential bellicose people, the men of Engong are valiant warriors who are experts in swordsmanship and wizardry. It is this unparalleled mastery of the occult arts that enables the men of Engong to be freed from death. Engong is a beautiful land, and home to thirteen great cities of which Oveng (seat of Akoma Mba himself) is the capital.

Oku is made up of the former three areas, and is occupied by mortals descended from the spirit Ndong Mebegue and his son Etura Ndong. The Beti-Pahuin peoples, Pygmies, Whites, all other people, and apes are said to hail from this place. The people of Oku are often as warlike and power hungry as those in Engong, but during peacetime their ability to throw celebrations has no equal.

Tropes found in Beti-Pahuin mythology include:

open/close all folders
Tropes A to H
Tropes I to O
do not weigh down your mind with the tears of little virgins."
Tropes P to Z
"And that is all I know of this tale"