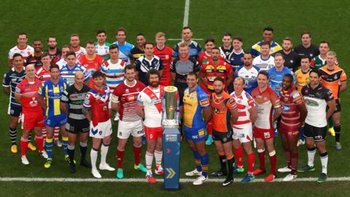 The differences from Rugby Union are mostly subtle to outsiders but gigantic in terms of how the two sports play, far more than say, the differences between the Gridiron versions in the USA & Canada. Union has 15-player teams; League has 13-player teams. Union is traditionally the gentlemen's game (though it can be played by women); League is the working-class game, and is played in professional leagues. And is also played by women. (Note—by women; not girls, and certainly not ladies. There is no such game as "ladies' rugby.")

The key difference between the two for laymen is that there is a "tackles" system not dissimilar to American Football. Only instead of trying to make 10 yards in four tackles, you have six tackles (referred to as a "set of six") to score a try (ie: get into the other teams "end zone."). Similar to American Football, if you are tackled with the ball after the aforementioned tackles without reaching your goal, you have to turn the ball over at that spot. So, similarly like American Football with one tackle remaining you boot the ball away and try like hell to rough up the opposition.

This is a "working man's game" for the eastern seaboard of Australia, with a long heritage that coexists, sometimes a bit uncomfortably, with the pressures of modern commercial sport. Australians are very good at it. This, like basketball and American Football in the USA, means that you have a lot of young men with a lot of money doing silly things in their spare time - only instead of bringing guns into the team's locker room, they have sex with a girl while their mates stand around pleasuring themselves, and defecate in hotel corridors, though not necessarily at the same time. (At least if you believe the somewhat hysterical media depiction of the sport - the extent to which this description is actually true of most rugby league players is, at best, highly debatable.)

Some of the more well-known leagues for Rugby League are:

Otherwise known as the NRL. This league is the top league of clubs in both Australia and New Zealand.

But first, a little history.

The league's origins come from the aftermath of the "Super League war" of the 1990s, a corporate dispute between the long-standing Australian Rugby League(ARL), which consisted of the New South Wales Rugby League (NSWRL) and the Queensland Rugby League (QRL) and the newly formed Super League of Australia, the former trying to prevent the latter's existence in order to keep its league's recognition of being the top-flight rugby league, as well as broadcasting rights. After snatching up enough teams that were unhappy with the ARL's administration, the Super League ran its premiership parallel to the ARL's season in 1997. At the end of the Super League season, both sides were able to reach an agreement in December, and the two leagues merged to form the NRL.

The regular season begins in autumn and ends in spring. At the end of the season, the team at the top of the table is given a minor premiership. After the regular season is the Finals, in which the top eight teams compete in a number of knockout and sudden-death games between the top eight teams over four weeks in August and September, until only two teams remain. The remaining teams then compete in what is the premiership-deciding game, the NRL Grand Final, one of Australia's most popular sporting events and one of the largest attended club championship events in the world.

NRL Teams: There are 16 teams in the current league, 15 from Australia, 1 from New Zealand.

The premier competition in Europe, with the next season in 2020 featuring 10 English teams and one each from France and Canada (respectively Catalans Dragons from Perpignan and the Toronto Wolfpack). Formed as a way by the Australian Super League to gain an upper hand in the War. (All the teams, however, were pre-existing.) The season begins in spring and ends in autumn, meaning it is played at the same time of year as the NRL. This also means the league isn't overshadowed by football. The Super League has a play-off structure leading up to a Grand Final much the same as the NRL, but the long-standing Challenge Cup knock-out competition is still played, separate from the League schedule.

Unlike the NRL, Super League operates with promotion and relegation. Super League is at the top of an elaborate system of leagues organised by England's governing body, the Rugby Football League. The two lower national levels are respectively known as the Championship and League 1; most of the competing clubs hail from England (and more specifically, the North, with Southern teams like the London Broncos being exceptions and certainly seen as such), though another French side, Toulouse Olympique, now competes in the Championship and League 1 has two Welsh teams. The aforementioned Toronto Wolfpack began play in the RFL system in League 1 in 2017, were promoted to the Championship after that season, and made it to Super League after two seasons in the Championship. The most recent change to the promotion/relegation system took effect with the 2019 season, with the bottom Super League side being relegated and replaced by the winner of a playoff involving the top five sides on the Championship regular-season table.