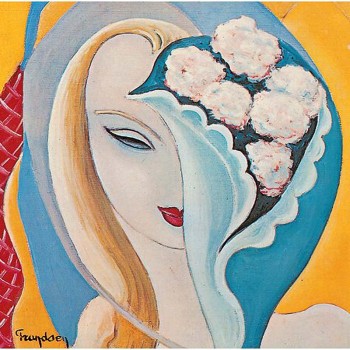 Layla and Other Assorted Love Songs is the first and only studio album by Derek and the Dominos, released in 1970. Fresh off the sessions for All Things Must Pass, Eric Clapton and houseguest/songwriter Bobby Whitlock commandeered the rhythm section from combative soul singers Delaney and Bonnie to form Derek and the Dominos, a short-lived Blues Rock band in which - by contractual force when necessary - Clapton would be merely an anonymous member of an anonymous band, touring small clubs to little fanfare and towing in a young hotshot guitarist to record an unheralded album. Thus hidden from critical expectations, Clapton expressed his seemingly doomed love for Patti Boyd, the wife of his best friend George Harrison, throughout a double album full of blues covers and soul-influenced originals.

The album was a moderate success in the United States on the strength of the single "Bell Bottom Blues" but vanished without a trace in Clapton's native UK. After drug problems tore the band apart, Clapton's handlers began re-releasing old material to keep the guitar hero's career warm, calling attention to the Layla album when the title track appeared alongside "Bell Bottom Blues" on a greatest hits compilation. Suddenly a massive success, Layla and Other Assorted Love Songs was everywhere at the same time Clapton himself was withdrawing from the world, thoroughly strung out from heroin and his failure (at the time) to win Boyd away.

Note: early CD releases are across two discs; releases since 1990 are on a single disc.

Do you wanna see me list tropes all here for you? Do you wanna hear me tell you how they all work? I'll gladly do it...