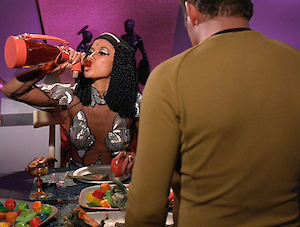 No, this isn't a Katy Perry video. That's Elaan, being her dignified self.
Advertisement:

The planets Elas and Troyius are both Federation members, but have been at war with each other for centuries. With those darn Klingons encroaching the territory, peace becomes imperative. How to solve this problem? Why, with a bit of Altar Diplomacy, of course! The Enterprise is assigned to transport Elaan, Dohlman (Basically, Princess) of Elas, to Troyius where she will marry the planet's leader. Petri, the Troyian ambassador, is there to help Elaan make a peaceful transition and learn the proper social graces. Easier said than done.

Elaan, to put it bluntly, is a bitch on wheels. Words are said, knives are thrown. Petri just manages to survive being stabbed in the back by his charge. While in sickbay, he reveals to Nurse Chapel that Elasian women have tears that make men fall in love with them when the men touch them. They really should've told Kirk. It seems that when she was griping about how no one liked her (Gee, wonder why!) she started to cry, he tried to wipe her tears and we get a Sexy Discretion Shot....

Can Kirk give up the woman he loves for peace?