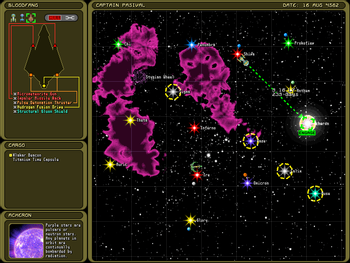 Strange Adventures In Infinite Space is a freeware game made by Digital Eel Games.

In the game, you control a featureless spaceship captain hired out by a shady "businessman" to explore a region of space known as Sector Prime on a ten-year charter. Along the way, you explore new solar systems, discover exciting new technologies, and find new alien races to talk to (or kill). At the end of the ten-year period, you are expected to return home with loot and tales from your strange adventure in infinite space.

...And that's it, really. The game takes about 5-15 minutes to complete, but it's strangely compelling nevertheless.

It has spawned a sequel of sorts (Although it is more of an Enhanced Remake) called Weird Worlds: Return to Infinite Space. This installment is not freeware, but contains the stuff the original had, and a lot more, including Game Mod support.

Not to be confused with Infinite Space by Sega.

. Weird Worlds can be bought from Digital Eel's webpage

, as well as DESURA and Steam.