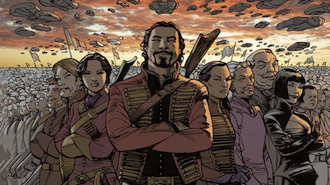 Say you want a revolution?
"I'm too cool to kill."
"Bojemoi!"
"Diavolo!"
Advertisement:

In the year of the Tsar 2666 AD, Imperial Russia once again entered a time of troubles. The rule of Vladimir the conqueror, Tsar of all the Russias, had been unopposed for five decades. Now it was being challenged by the house of Romanov, the most powerful imperial dynasty beside the Tsar's own.

Warfare on such a scale had not been contemplated since the last revolution, from which the Mafiya clans rose to power. On the ashes of that conflict, they founded a new empire based upon the underworld principles of the ancient Vorovskoi Mir- the Thieves world.

In such a world, a single man could rise to prominence if he was a fool and an adventurer, a gambling man whose only stake was his life. Of course, this could only happen if he survived long enough and didn’t get his throat slit in the boudoir of some lady of dubious morals first…

Nikolai Dante is the eponymous hero of a comics series published in the weekly British science fiction anthology 2000 AD. Created by writer Robbie Morrison and artist Simon Fraser, Dante first appeared in 1997. Fraser was the primary artist for the first three years of the series, with support from artists such as Charlie Adlard, Henry Flint, Chris Weston and Andy Clarke. From 2000 the majority of the stories were painted by John Burns, until Fraser returned to the character in October 2006, when the two artists began to alternate on different stories. The current stories as of early 2012 have been confirmed by Word of God as the last arc of the series; with Sympathy for the Devil being its last story, though a story set during the strip's early days was published in 2017 and a Spin-Off is reportedly in the works.

Set in the twenty-seventh century after a resurgent Imperial Russia has seized absolute control of both the entire Earth and an interstellar domain, the series follows Dante, a swashbuckling young thief and ladies' man, as he discovers he is an illegitimate scion of the Romanov Dynasty, aristocratic rivals to the Tsar, Vladimir the Conqueror of the House of Makarov.