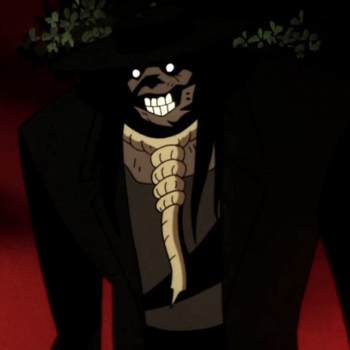 Great for hanging out with friends (and also hanging them).
Advertisement:

This character's formal attire seems a bit... morbid. Basically in place of a necktie they're sporting a length of rope that's been tied off in the manner of a hangman's knot. This seems to pop up mostly (but not always) when a character is undead, as if to suggest that their death was due to Hanging Around. If not explicitly undead, characters with this feature will still often have a "spooky" Halloween air about them. A more lighthearted take on this trope is to compare a necktie to a noose to indicate that any job which requires formal attire is A Fate Worse Than Death.

There may be some Lampshade Hanging about the logistics of wearing an article around one's neck that can be so easily pulled tighter. If not careful, this trope might well overlap with Killer Outfit.