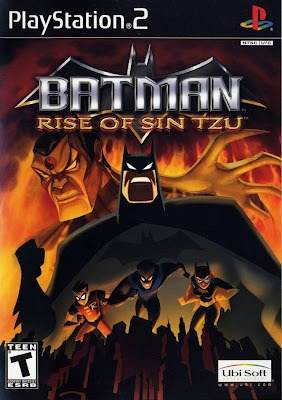 Batman: Rise of Sin Tzu is a 2003 Beat 'em Up and the second video game based on The New Batman Adventures. It is the anniversary of Thomas and Martha Wayne's murders and someone celebrates it by unleashing chaos in Gotham City.
Advertisement:

Players can choose between four different hero characters to use. Batman himself is the strongest but slowest among them. Batgirl is the fastest and most agile character, but also the one with the weakest attacks. Robin is somewhat slower but stronger than Batgirl. Nightwing combines great strength and agility. The main opponents are the Scarecrow, Clayface, Bane, and Big Bad Sin Tzu (voiced by Cary-Hiroyuki Tagawa). Commissioner James Gordon appears but is not playable.

The game includes cameos by Harley Quinn, The Joker, Mr. Freeze, and Poison Ivy, still in the same prison cells they were locked in at the end of the previous game.

Scarecrow: Batman! A bit late, aren't you? Commissioner Gordon is scared out of his mind I'm afraid.
Batman: Afraid? No. You're not afraid. But I'll teach you what fear is.