Literature / I Am Number Four 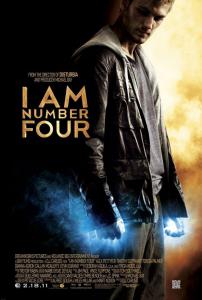 John Smith is Number Four.
"In the beginning we were a group of nine. Three are gone, dead. There are six of us left.They are hunting us, and they won't stop until they've killed us all. I am Number Four. I know that I am next."
Advertisement:

Part of the Lorien Legacies.

Number Four is an alien from the planet Lorien, which was destroyed by another evil race, the Mogadorians, whose sole purpose is planetary extinction. Number Four wasn't the sole survivor, as there were eight others, along with their guardians, who escaped the planet's destruction. These nine remnants are destined to use their inner powers to defeat these evil intergalactic terrors, but they must survive long enough to master them. The aliens seek out the survivors, one by one, in order of their number. Numbers one through three have been killed.

Number Four is next.

I Am Number Four is a Young Adult sci-fi novel written by Pittacus Lore, the Pen Name of James Frey (of A Million Little Pieces infamy) and Jobie Hughes. Published in 2010, it had the film rights picked up by DreamWorks over a year before it was even released. The Film of the Book was released in February 2011, starring Alex Pettyfer, Dianna Agron, Teresa Palmer and Timothy Olyphant. Both the book and the film proved to be decent hits; the book spent six weeks on the children's chapter of the New York Times Bestseller List, while the film has already made back its $50 million budget.

While the film series has been shelved due to relatively-poor performance at the box office, the novel series has continued, and is planned to extend as far as six books.

The book series has gained Frey (further) infamy and controversy even before it hit shelves: Frey's publishing house, Full Fathom Five, commissioned I Am Number Four specifically to write "the next Twilight" or "Harry Potter" with the idea of being adapted into a film franchise from the onset and has been accused of being akin to a fiction sweatshop and producing works of derivative nature. New York Magazine published an article

Tropes in I Am Number Four:

Tropes specific to the novelnote Tropes for the other novels can be found here:

Tropes specific to the film: