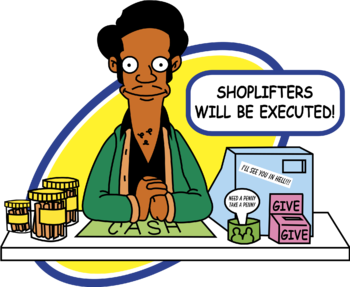 Thank you, come again!
"Koreans tend to only have two basic facial expressions. It's either very calm and stoic and serene or GET OUT OF MY STORE!"
— Margaret Cho
Advertisement:

Oh, you know the Asian person owns the store. They care about the money in the till. If they did not own the place, you and your gun could just have it. They do, though, so they'll either blow your head off if you try anything, or force you to do the same to them. All while speaking in a ludicrous and hilarious accent.

This trope is related to the fact that many grocery stores and corner shops in America, Australia, New Zealand, and the UK are owned by East Asians (usually Koreans), South Asians (usually Indians and Pakistanis), and Middle Easterners (usually Levantine Arabs).

France, Northern Europe, Spain, and Japan have similar stereotypes, with the only real difference being the nationality of the owner. In France, the shopowner will be Moroccan or Algerian (usually a Berber

)note The idiom "l'arabe du coin" (literally "the local Arab") means "the small convenience store in the immediate neighborhood", in Northern Europe an expatriate Turk (though generic Middle Eastern is also popular), and in Spain and Japan Chinese.

In Westerns, the grocer will often be Chinese, complete with opium pipe.

Can overlap with Asian Rudeness.