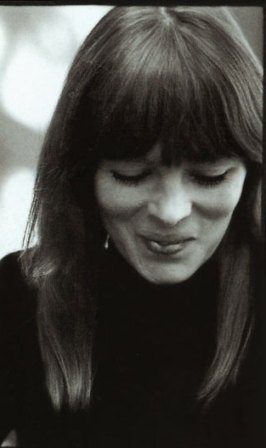 Nico, circa 1970.
"And with The Velvets come the blonde, bland, beautiful Nico, another cooler Dietrich for another cooler generation. Art [...] will never be the same again."
— John Wilcock of The East Village Other's review of the Exploding Plastic Inevitable show, quoted in the liner notes of The Velvet Underground & Nico CD.
Advertisement:

Nico (aka Christa Paffgen, 16 October 1938 – 18 July 1988) was a German singer, model, actress, and Pop Art muse. Born in 1938, she started modeling when she was a teenager and later moved into acting, landing a minor blink and you miss it appearance in Federico Fellini's La Dolce Vita. Later still, she started working with Andy Warhol and Paul Morrissey on their experimental films, and it was Andy who inserted her into the Velvet Underground's lineup. The collaboration ended rather quickly because she and the band didn't really get along and the Velvets soon broke their ties with Warhol. Nevertheless, her work with the Velvets became legendary in the rock community, despite the fact that her involvement was limited: She only sang three songs and added backing vocals to another on The Velvet Underground & Nico. Additionally, she received no writing credits and was credited as "chanteuse."

Nico soon embarked on a solo career, using the opportunity to demonstrate the full range of her musical talent. Her debut album, Chelsea Girl, was met with praise, despite the fact that Nico wasn't really involved in the production of the album and was dissatisfied with it. It tends to be divisive, with some of her fans regarding it as a great album, and others regarding it as an unworthy recording that is unrepresentative of Nico's talents and has attracted an undue amount of attention. She started taking control of her music starting with her second album. Because of this, her sound evolved into something darker, more experimental, and more harmonium driven. Many of these albums are regarded in some circles as masterpieces. She also worked briefly with the French avant-garde film-maker Philippe Garrel (with whom she had a relationship), making a slew of obscure avant-garde films, Le lit de la vierge, La cicatrice interieure, Les hautes solitudes that are mirrors to her avant-garde music. They also starred her son Ari, the result of an affair with Alain Delon (who refused to acknowledge the boy as his son, despite him being the spitting image of Alain).

On July 18, 1988, Nico had a minor heart attack while riding a bicycle in Ibiza and hit her head as she fell. A passing taxi driver found her and had a hard time finding a hospital that would admit her. She was incorrectly diagnosed as suffering from heat exposure instead of having a severe cerebral hemorrhage, and died as a result. Her legacy still lives on, as part of the Velvets and as a respected solo artist. Musicians influenced by her include Siouxsie and the Banshees, Bat for Lashes, Patrick Wolf, Björk, Bauhaus, Coil, Elliott Smith, and Dead Can Dance. Also, despite their Creative Differences, the Velvets liked her voice enough that whenever they performed "I'll Be Your Mirror" (a song where they fought with Nico to get the final result) live, they'd sing it in a German accent.

The following tropes are related to Nico: