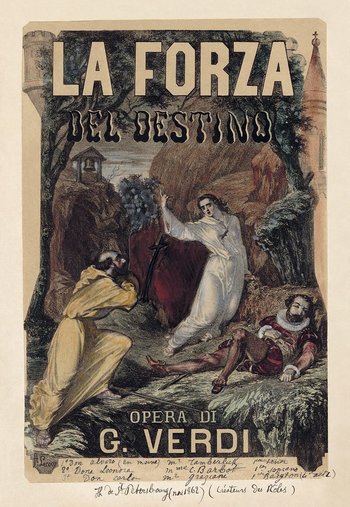 1870 poster for the opera
Advertisement:

La forza del destino ("The Force of Destiny") is an opera by Giuseppe Verdi, set to a libretto by Francesco Maria Piave, and adapted from the Spanish play Don Álvaro o la fuerza del sino. After its 1862 premiere at the Bolshoi Kamenny Theatre in Saint Petersburg, the opera has been frequently performed, with many complete recordings.

Set in Spain and Italy around the mid-18th century, the opera tells the story of Don Alvaro, a young South American nobleman with mixed-Inca blood, who is in love with Leonora, the daughter of the Marquis of Calatrava. However, the Marquis strongly disapproves of Alvaro, and when he catches the two lovers just as they're planning to elope, Alvaro attempts to surrender himself. However, his pistol goes off, mortally wounding the Marquis, who dies cursing Leonora.

A year passes since the Marquis' death, and Leonora and Alvaro are separated. One evening at an inn in the village of Hornachuelos, Don Carlo di Vargas, the brother of Leonora, enters the inn disguised as a poor student. He's seeking revenge against Alvaro and Leonora for dishonouring the family name. During supper, a popular young fortune teller known as Preziosilla arrives and persuades the men at the inn to enlist in the war for Italy's freedom. At the same time, Leonora passes through the inn while disguised as a man, as she's on her way to a monastery to live out the rest of her days secluded from mankind. She reveals her true identity to Padre Guardiano, who accepts her into the hermitage.

Meanwhile, Don Alvaro joins the Spanish army under a different name, and one night, he saves the life of Don Carlo, who is also serving under a different name. The two become close friends and fight side by side in battle. However, Alvaro's true identity is revealed when he is severely wounded and asks Don Carlo to destroy a valise of letters, only for Don Carlo to peek at them and discover Leonora's picture. The two of them engage in duel when Alvaro has recovered, but are separated, and Alvaro decides to enter a monastery.

Don Carlo manages to track down Alvaro at the monastery where, unbeknownst to him, Leonora is at. Upon finding him, Don Carlo forces Alvaro into a fight, only to end up mortally wounded. Alvaro runs into Leonora's hermitage for help while the latter is praying, and the two lovers recognize each other. Leonora comes to look at her brother, only for him to stab her in the heart when she bends down. As she returns to Alvaro, with the help of Padre Guardiano, Leonora dies while Alvaro and Padre Guardiano pray to heaven.

The opera's overture has become quite popular in its own right, and has become a standard in orchestral repertoire, often being played at concerts.