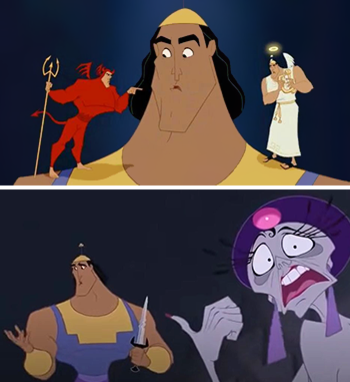 Above is what Kronk sees; a dramatic inner conflict between good and evil.
Below is what everyone else sees; some musclebound idiot talking to himself.
Nale: [Thinking] My machiavellian plan is beginning to come together. Now that I have secured the aid of these gullible saps, the Talisman shall soon be mine! Indeed, I have worked for years for this very day. It seems like just yesterday when my father took me aside and told me—
[beat panel showing Nale, Haley, and Roy standing around]
Haley: [whispering] Why is he just standing there?
Roy: [whispering back] Internal monologue. Give him a minute.
— The Order of the Stick, #46

The Inner Monologue, Flashback, Imagine Spot, and other such tropes are great ways of illustrating character, showing inner conflict, etc. Normally these tropes are shown taking place almost instantly with other characters around either not noticing or barely noticing that the character temporarily zoned out, so it's pretty rare for Alice to end an internal monologue, flashback, or Aside Comment to the audience only to see Bob standing there staring at her and wondering what the heck Alice was doing and why her mind was off in another world.

In this trope, however, the other characters around do notice. While Alice is mentally taking a time out, everyone else can see the prolonged silence, distraction, or strange behavior, (especially if Alice is in the middle of talking to people who aren't there, like an Imaginary Friend, the Good Angel, Bad Angel, or figures from her past) and then they react or comment to the situation.

Often played as a form of Bathos, especially if Alice was thinking about something serious and it draws a comedic reaction.

Often revealed via Cutting Back to Reality. Compare and contrast Not So Dire, (where an audience is misled by serious-sounding dialogue into believing that a situation is critically important when it's actually over a much more trivial matter) Anti Climax Cut, and Acting Out a Daydream. Compare the various "x is a free action" tropes, Plot Time, Imagine Spotting, and Caught Monologuing. Can overlap with, or be a sort of meta Failed Attempt at Drama.

Anne thanks her hallucination of Spring for the help... weirdly confusing the others.

Anne thanks her hallucination of Spring for the help... weirdly confusing the others.