Although The Bounty and The Ball are two 11 minute halves of one 22 minute episode, their first airings were individual, as separate episodes. They are listed here in the order they appear on the credits for the episode, but the order in which they aired is reversed. 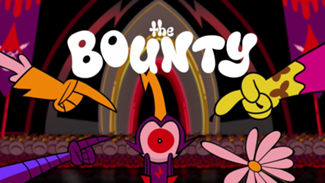 Peepers is having a bad day... and it's going to get worse.
The Bounty first aired on January 24, 2014.
Advertisement:

Aboard Lord Hater's Hatecraft, Peepers is having a meltdown. He's ranting about proving how ruthless, evil, and strong he is. Lord Hater is playing a video game of himself fighting Wander (well, he's fighting. Wander's hugging him). Once Peepers has his attention again, Hater dresses him down for failing, repeatedly, to do the most important thing he has asked of his major domo: capture Wander and Sylvia. Hater introduces three bounty hunters he has hired to do the job Peepers can't. One is a pelt-clad huntress. One is a Killbot 86. And to Peepers' ever-increasing chagrin, the third is a potted plant. Hater shows his hirelings the location of Wander and Sylvia, and insists that they be brought to him alive because he thinks their screams of agony be the perfect addition to his Torture Megamix. They take off and Peepers is left alone with the Watchdog he abused in his proving himself rant.

Peepers rants to the Watchdog that if the bounty hunters succeed, Hater's evil will spread across the galaxy allowing Hater to rule the universe. The Watchdog asks if that isn't their goal, so hence a good thing. Peepers clarifies that Hater's evil is supposed to spread across the galaxy so he can rule the universe because of Peepers, not because of someone else.

Peepers rushes to the planet's surface. Wander and Sylvia are unaware they're being hunted; they're simply having a good time enjoying the amusement park world's attractions. Peepers is pleased that he seems to have beaten the bounty hunters, only for the huntress to show up. As she closes in, Peepers thwarts her blowdarts by tossing coins at Wander and Sylvia, making them duck when they would otherwise have been hit. She threatens Peepers for messing up her hunt and says she'll bag the bounty and he'll be lucky to end up cleaning the anti-gravity toilets. He finally gets her out of the way altogether by tricking her into the enclosure of the same species of large and vicious animal whose skull and pelt she wears as fashion statements.

When Peepers returns to his own objective of catching the pair, he finds the Killbot 86 having a go. The Bot targets our heroes, only for Peepers to knock a hapless alien into the path of its bright red laser beam. Its shot wasn't deadly anyway: the miss simply teleports him aboard the Hatecraft. Peepers and the Bot continue like this for several minutes, the Bot's teleport beam repeatedly missing Wander and Sylvia. Aboard the Hatecraft, a bemused Hater finds himself surrounded by tourists who think they are still enjoying a Phunulon attraction. They offer him advice on playing his Hater vs. Wander video game, and he eventually decides to take them to the torture room to add to his Torture Megamix. They cheerfully go along.

Back on Phunulon, Peepers has dispatched the robot (and made a good bit of money from people thinking the whole thing was an attraction), and is about to catch his breath, when — the Potted Plant shows up. The Plant turns out to be an animate omnivore, and eats Peepers in one bite, quickly followed by Wander and Sylvia. Wander briefly mistakes it for a ride, until Sylvia points out the truth. At which point he begins chattering cheerfully about being so happy Peepers has finally captured them, but so sad that they've actually been captured. Peepers sees them stuck behind bars, the Plant replaced in Peepers' job, and Peepers himself demoted to cleaning the anti gravity toilets. It turns out he was imagining that if he lets the Potted Plant succeed, so he uses the lightning bolt on his helmet to slice his way out, and beats the Potted Plant into submission.

Unfortunately, while Peepers is freaking out on the plant to avoid his worst nightmare coming true, Sylvia and Wander have Orbbled up and are departing with thanks to Peepers for saving them.

All of this has, to Peepers' dismay, been recorded by Hater, who gives him an even worse dressing down, with a repeated instant replay of Peepers letting Wander and Sylvia escape. Peepers tries to salvage the day by asking Hater if he's learned his lesson about hiring bounty hunters. Peepers is excited to hear Lord Hater say he has; he realized he simply hadn't hired enough, and presses a button to reveal dozens of bounty hunters. Peepers has another meltdown, and Hater is pleased to discover that Peepers' cries of dismay and frustration are perfect additions to his Torture Megamix.

Tropes appearing in The Bounty: 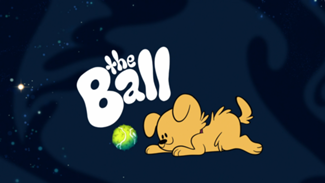 Who's the cutest little puppy of mass destruction? You are! Yes you are!

Wander and Sylvia are mellowing out, big time. They're enjoying the marvellous bubbles of the Relaxatorium, surrounded by the adorable, big-eyed population of the planet. But then there's a deep, sonorous chime, and Beeza, their hostess, tells them she's glad they enjoyed their stay, but it's time to abandon their planet forever.

Wander of course is curious to know what's going on, so Beeza explains. Eight planets now they've settled on, and each time the chimes of doom herald the destruction of their world. They used to call the force World Buster, but now they just call him Buster.

The chimes of doom turn out to be the chiming of a dog tag against a collar. Buster is an adorable, but giant golden retriever space puppy who thinks their planet is a ball.

Wander feels terrible that the tiny little aliens need to abandon their home for the eighth time. He feels worse still when they explain that they have no idea where they're going and will just fly blindly until running out of fuel or food — and that there may be problems with cannibalism when that happens. He insists they should fight to keep their home and has a plan to save it! So they build a rocket ship, fire it into space, and deploy its attachments. A rocket bone! The space puppy runs off after it. The aliens are delighted that their home has been saved. Only the puppy returns, wreaking further destruction — because, as Sylvia points out — dogs fetch.

Wander suggests a new plan. He arms every little alien on the planet with dog whistles that they all blow simultaneously. Buster is immediately displeased by the noise and everyone rejoices — until they run out of air, and the sticky rain of doom (aka drool) begins to fall. The creatures go to board their ship again, but Wander is undaunted.

Wander suggests a new new plan! He gets every creature on the planet to toss its worst, stinkiest, most disgusting trash at the tongue of Buster that is now looming toward them. But Wander miscalculates! Dogs love trash! Now Buster is chomping on the ball, and the ground beneath their feet is breaking up! It looks to be the end of the little planet, no matter what.

The aliens board their ship again to flee, Sylvia getting herself and Wander aboard just before they take off. Wander is disconsolate that his plans have failed and the friendly aliens have had to abandon another world to blindly search for yet another homeworld that will eventually be destroyed by Buster. Sylvia tries to console him, explaining that sometimes one just has to flee a problem too big to handle. Wander snaps and takes over as pilot, turning the ship around and landing it on Buster's back.

Sylvia scolds Wander about having wasted all their fuel, that the people all need a planet with fresh air and places to build homes. As she speaks, she realizes where he's landed them is a pretty nice location after all. Wander grins and says to the grateful populace that they didn't have to flee; they just had to flea. The little aliens thank Wander for finding them a permanent home. As Wander and Sylvia Orbble their way into space, there's a distant, ominous meow, and Wander spots a planet that looks a lot like a ball of yarn.

Tropes appearing in The Ball:

Back to Wander over Yonder main page.