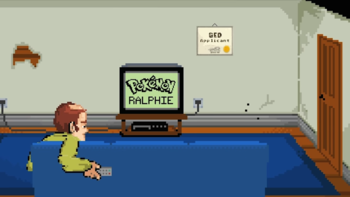 Pokémon Ralphie is a series of shorts by Dorkly parodying the Pokémon franchise while also telling an original story.

The story focuses on a middle-aged man named Ralphie, a former Bug-Catcher who has delusions about being Red's number one rival and who is intent on proving it. The series can be found here.

It is a Spiritual Successor to Pokémon Rusty, with the titular hero voiced by the same person.