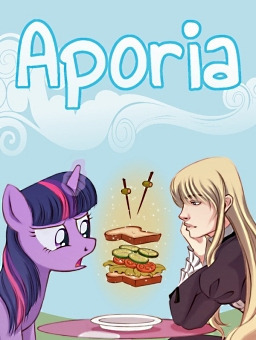 is a My Little Pony: Friendship Is Magic Rational Fic that discusses My Little Pony's canon and the reason for its numerous inconsistencies, the "humans in Equestria" genre of fanfiction, and the nature of storytelling in general. It features two multiverse travelling women — Mary, a proper British lady and Rika, who simply describes herself as an Eldritch Abomination — who decide, on a whim, to visit one of the many versions of Equestria. Despite Mary's initial reluctance to interfere with the local ponies' affairs, soon they become caught up in the story, altering it heavily as they nudge the ponies into discovering the true nature of Equestria. It all starts with a simple question: "who invented sandwiches?"The story consists of "conversations", rather than chapters, never from the same character's perspective twice in a row, and while it indeed features a lot of talking, it also has some epic action scenes, sometimes involving tech from other universes. The story is both a treatise on the nature of fiction, and a letter of love to My Little Pony, anime, science fiction and other media.