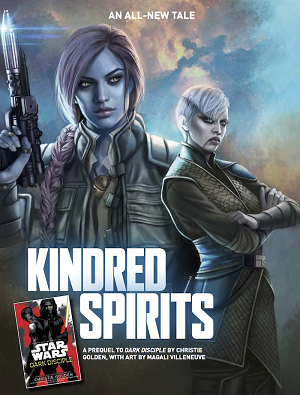 "Kindred Spirits" is a Short Story written by Christie Golden set in the Star Wars universe. It was first released on July 21, 2015 in Star Wars Insider Magazine #159 and serves a prequel to Golden's novel Dark Disciple.

After being the Sole Survivor of a team of mercenaries sent to steal an item off a freighter, Asajj Ventress is rescued by the notorious Pantoran pirate Lassa Rhayme, who had been planning on hijacking the freighter Asajj attacked. The two agree to work together to get the freighter back from the Ohnaka Gang, who hijacked the freighter after Asajj's attack.