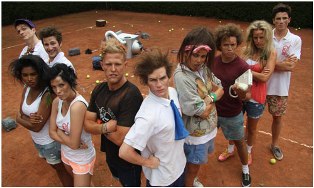 What do you do when you have a children's channel with no commercials? Fill up the space between shows with a quirky program to entertain your younger audience in the interval, and feature younger celebrities that will appeal to them. Thus, Studio 3 was created. It is described on it's home, Australia's only free-to-air children's channel, as 'the hub for everything that happens on ABC3 - the place where it all comes together.'

Hosted by Kayne Tremills and Amberley Lobo, known as 'Kayne and Ambo' (although they were recently joined by James Elmer and then Olivia Phyland and Alfie Gledhill), it's an eclectic mix of audience participation, celebrity interviews, and odd skits. One recurring feature is a series of mini-episodes starring the hosts, called Bitcom. Bitcom proved popular enough to get it's own 40-min special, Bitcom and the Oblivion Ray.