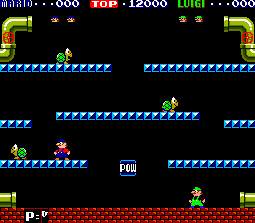 Something's gumming up the plumbing, poor Luigi's in a bind
Giant turtles out to get him, creepy crabs are right behind
Fighter Flies, jeepers, yipes!
They're all comin' out the pipes!
Luigi: Mario, where are you?!
— The commercial

for the Atari port of the game (sung to the tune of the theme for Car 54, Where Are You?)
Advertisement:

Mario and Luigi, the Mario Brothers, must try to get rid of Shellcreepers (green turtles, and completely separate creatures from the Koopas that would debut later), Sidesteppers (crabs, which need to be hit twice), and Fighter Flies (flies, which can be defeated only while they touch the platform) that come pouring out of the waterworks. Hit the floor beneath them to flip them over, then kick them into the water. Collect coins for bonuses.

Keep track of the green fireballs as they will appear more frequently. The red fireball can also be a menace. If need be, you can hit the fireballs from below when they touch the platform. Beware of hitting the red fireball. It rapidly reappears and moves much faster.

Hit the POW platform to knock over your enemies and destroy fireballs. Be wise, because you only get three, and it doesn't come back until after the bonus round. Each difficulty level begins with three POWs and a bonus wave in which 10 coins are available to be collected.

Released in arcades in 1983 and later ported to home consoles, the game introduced many elements that would remain in use in later Mario games, like turtles as enemies, pipes, collecting coins, and Mario's brother Luigi.

Not to be confused with the Fan Film Mario Brothers.