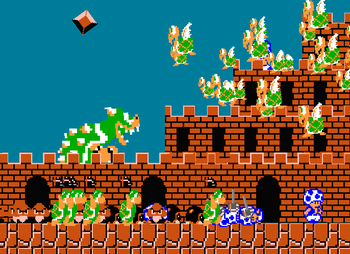 This is not your typical Mario story...
Advertisement:

Mario Brothers is an epic five-part Adobe Flash video series featuring the Super Mario Bros. series and characters. It was created by Alxlen. The story is a tragedy, using 8-bit sprites and orchestral music to cinematic, intense effect.

One day, King Koopa declares war on the Mushroom Kingdom, with plans to storm the castle and kill the Princess. Mario and Luigi try to stop him, but during the battle, Luigi is hit by a fireball and dies, while Koopa escapes to carry out his invasion.

After a period of mourning, Mario sets off to try and save the Mushroom Kingdom and the Princess, and bring his brother back to life... but it may already be too late.

on Newgrounds or here