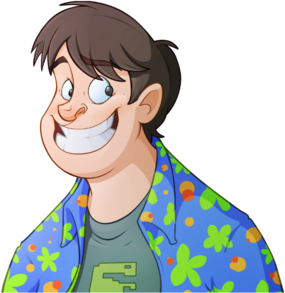 Two New Media enthusiasts investigate the various computer game controversies, video game ventures and digital disasters that you didn't even realize were a thing, with series such as "Games Yanks Can't Wank", a series about games that were only released in the United Kingdom on their beloved home computers and "Fact Hunt", a series that, of course, details various obscure facts about video games, old and new, as we say: But, hello you! This is the page on Guru Larry and Wez, and we welcome you to it!

Originally from ScrewAttack, these two guys from The Midlands provide voice-over top-10 countdowns related to popular video games, as well as other gaming-related videos. Can be found here

As of this writing, Larry is one of the few members left on Channel Awesome (along with Doug Walker and Brad Jones) in the wake of Channel Awesome's March-April 2018 controversy, solely out of spite and to watch the drama.