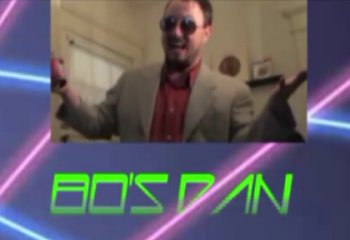 A character and show created by Brad Jones as a spinoff of The Cinema Snob. Dan got zapped from 1989 to the present when in Brad Tries... Brad opened a bottle of New Coke

. Since then, Dan has settled with his roommates, Dolly and R.O.B. the Robot, and his neighbors the Crabtrees, to talk about his favorite stuff from The '80s, no matter how stupid or schlocky it is.

Most of the show is done in a fake sitcom format, complete with canned audience reactions. Plots usually involve Dan gushing over stuff from his time, his friends getting annoyed, and R.O.B. trying to make it with Mrs. Crabtree, to her husband's increasing annoyance.

Episodes can be found here

80's Dan has reviewed the following: