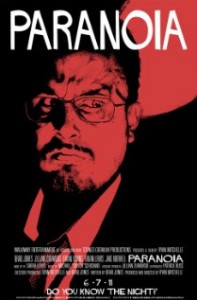 Do you know the night?
It's just been a really hectic night...
— Mark Bishop
Advertisement:

Mark Bishop is not having a good night, and his wife leaving him isn't even the half of it. A serial killer is on the prowl, each murder different from the last, and Mark has just killed an intruder who attacked him in his home. Unsure if the man is the killer or not, Mark just wants to keep the attention off of himself. Dumping the body and avoiding the authorities, after a while he isn't sure what he's running from. Maybe it's just his own paranoia getting to him.

Paranoia is a 2011 film directed by Ryan Mitchelle, written and starring Brad Jones of The Cinema Snob fame. A psychological thriller with horror and mystery elements, the indie movie has all the makings of a cult hit behind it. At least, it certainly has a substantial fanbase to get it kicked off. Jones has said that he drew inspiration for the screen plays of David Lynch, Wes Anderson and Alfred Hitchcock.

An alternate cut of the film, in black and white and closer to Jones's original script, can be viewed for free here

Given the film's nature as a psychological thriller, MANY of the tropes below are chock full of spoilers. Proceed with caution.