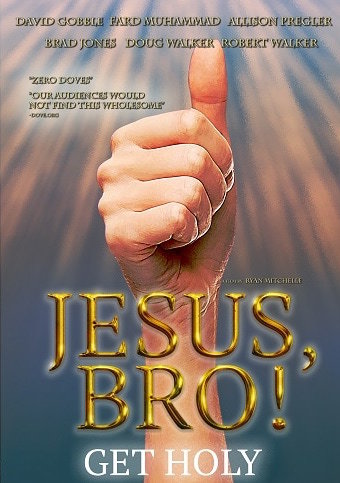 Only people like these would take a 0 out of 5 and consider it a win. Then again, the Dove Foundation gave 4 doves to Old Fashioned...
"Zero doves!"
— The Dove Foundation's review of the film
Advertisement:

Rick "The Rickhead" Whitehead is one of the most popular atheist Youtubers on the Internet, widely respected by his peers for his no-nonsense method of telling people exactly what they believe but are too afraid to say themselves. Things seem to be going well for him as he is told that he is to be given the "Atheist of the Year" award, but a subsequent fight and breakup with his girlfriend leads to a night of drinking where he passes out and has a vision of ...Santa Christ, who tasks The Rickhead of using his Internet soapbox to spread the good word to his millions of followers.

It's worth noting the spoof is specifically targeted towards "wholesome" Christian films such as God's Not Dead, Saving Christmas, and War Room rather than religion itself.

Compare and contrast with Let There Be Light, a Christian film released shortly after this film that has an identical plot, but plays it completely seriously.