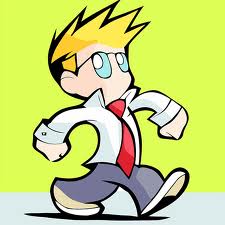 A self-proclaimed pimp who is ostensibly the main character of the strip. Late in the strip, he hugs the wrong demon

, who BOMFs him and creates his Superpowered Evil Side named Sleaze

As of a storyline starting in late 2017

, he managed to get rid of Sleaze, only for him to take on a life of his own.

, Monique's shadow has turned demonic, determined to protect Monique from things such as rotten tomatoes, through disproportionate retribution. The demon shadow's name is apparently Demonique, not to be confused with Monique herself when she played at being a demon.
Criminy

Nerdy bookworm who reads a lot under a tree. 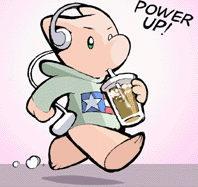 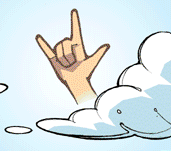 Needs no further explanation.
The Devil 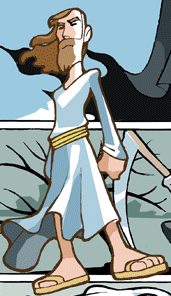 Representative of all Eastern religion. 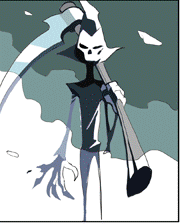 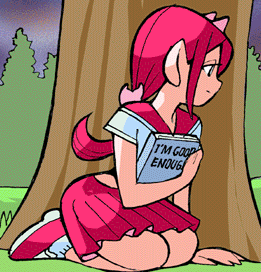 , also known as Fyoosh. She has undergone extensive character development (and got lots of screen time) since late 2008.
Blue 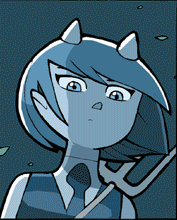 Overall, still mostly evil. Given her Character Development and her role in The Devil's industries, it would be most incongruous to continue calling her "Baby Blue".
Angie 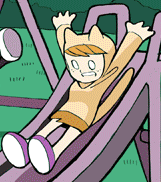 A dark orange succubus created from a country girl 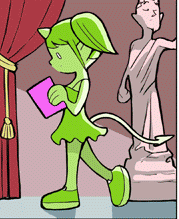 A Devil girl stripper brought in by the Devil to replace Fuchsia. 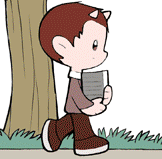 The bouncer at the Devil Girl Strip Club. 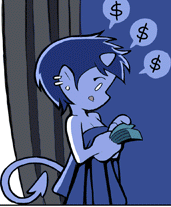 A succubus working as a stripper in the devil girls strip club.
Milton

A little scientist demon in charge of Deviltech as well as the Devil's surveillance systems.
Vainglorious

You shouldn't do that. Not without proper training.

A demon who may be looking to overthrone The Devil. He's also a growing artist, and quite vain about his art. He was the only known demon able to enter the Reality Zone for an appreciable amount of time, until Fuchsia finally pushed herself into it.

Vainglorious' Assistant and general all around toady.
Bondage Guy

A pair of female embodiments of the trope Bondage Is Bad.
Sleaze

A demonic version of Slick created by a incorrectly cast BOMF. 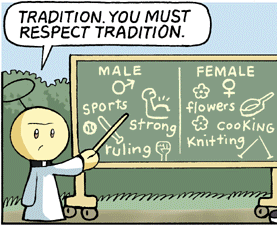 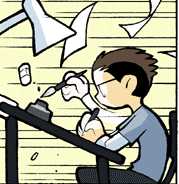 Mostly keeps to himself

. The owner of Pooch and Percy.
Xanthe Justice 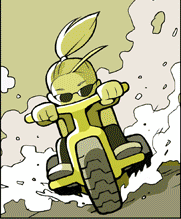 A bicycle riding black feminist girl, who was named here 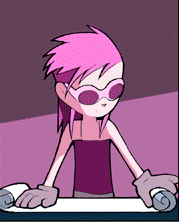 The machine expert of the Sisterhood.

A young fan of "It Girl" Monique
Violet

A girl first seen being trained by Nana.

Also seen with the rest of the Sisterhood.
Lilith 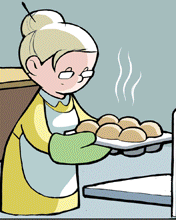 An elderly and benevolent woman who runs a coffee shop.

Showed up around the '08 elections to counter Sarah Piglin

A young fan of the Cartoonist.
The Fifth Sister

A young woman who went on a date with Criminy early in the strip's run (in 2002). She reappears in 2012, as a consequence of Blue's search for dirt on Criminy

Nana's sister, and a stern witch. She's the proprietess of the Witches Inn.

An inseparable pair of angels. 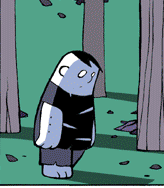 The zombie of one (or more) of the damned souls who loved Fuchsia's stories. Deprived of these after her Heel–Face Turn, he's now escaped to look for her.
Uncle Sam and Lady Liberty 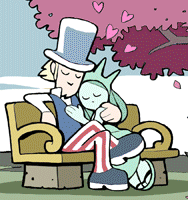 Not the happiest family

, at least these days. Uncle Sam is theoretically well-meaning

and easily misguided. Most definitely not depressed

. Also, get off his lawn.
Cupid

Enough said. First seem shooting an arrow to Criminy to fall in love with Fuchsia

A mysterious and ominous hooded figure that apparently controls the Bomf District on and off the internet.
The Old Year

The Old Year, known progressively in Roman Numerals from MMVIII to MMXVIII.

Usually an old man, appearing in December, always appearing the same. Futilely tries to avoid meeting his doom, but failing that, settles for Going Out with a Bang, sometimes bringing Death with him. (Death always gets better.)

A companionship gynoid created by Deviltech and bought by Slick.

Weaponized Fembot and her Three Copies

A fembot created by Milton to destroy Rogue Fembot.

After falling into the Reality Zone, she was destroyed by a self-destruction mechanism. Her memory chip was retrieved by the Sisterhood and uploaded to her copies. Only three survived the escape and they're looking for Rogue Fembot.
Second Runaway Fembots

She's watching the news coverage in the Search arc, and a commentator poses the standard terrorist or freedom-fighter question. This motivates her to run away. She meets up with and befriends the runaway Lady Liberty. By the time of MMXV, they've learned the joys of jumping in leaves.
Illuminati Drones

after being used to break out in the "Devil Tech Headquarters" arc.

It has since become inseparable from them.
Enlightened Drones

Illuminati drones, sent forth by Satan, met the Buddha and got Enlightened.

Apparently Satan can't zap them back.

on Christmas Eve.
Percival and Pooch