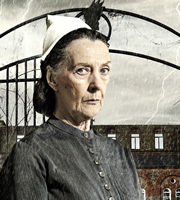 "If Mr. McMurphy doesn't want to take his medication orally, I'm sure we can arrange that he can have it some other way. But I don't think that he would like it."
— Nurse Ratched, One Flew Over the Cuckoo's Nest
Advertisement:

Nurses, like doctors, are usually good in fiction. After all, a person who works to save lives can't possibly be evil, right?

Not in the case of the Battleaxe Nurse.

The Battleaxe Nurse is an incredibly sadistic and cruel nurse, often older (and uglier) than her more angelic counterpart, and Always Female. She gets her kicks from kicking patients, the weaker the better. If she isn't already the head nurse, her cruelty gives her a degree of power over both the patients and the other nurses. Anybody who goes against her ends up injured or worse, and she jumps at the chance to give a particularly rebellious patient a lobotomy. Sometimes the Battleaxe Nurse has a hint of the Mad Doctor in her, especially if she decides to test interesting new drugs on her helpless patients.

Another origin is by subverting the Hospital Hottie trope—rather than conform to male fantasy, the Battleaxe Nurse crushes it.

On a deeper level, the concept of a sadist nurse explores a very real fear that many patients have going into hospital. It is, sadly, Truth in Television that some of the most vulnerable people are badly treated while they are weakened and in the care of strangers. By creating characters in media that express this fear, negative emotions can be explored from a safe distance.

The most famous example of this trope, if not the Trope Maker, is Nurse Ratched from One Flew Over the Cuckoo's Nest.

There's also a milder version more common in comedy. This version is still rather unsympathetic and enjoys having power over the patients and other nurses, but can still say with some justification that everything she's doing is for the patients' own good (although the patients are unlikely to see it like that), and sometimes she's actually right. In British works, she almost certainly has the title Matronnote which is the actual, if old-fashioned, job title for the most senior nurse in the hospital and is played by Hattie Jacques (who actually was a Red Cross nurse during W.W.II). This type of Matron figure was also popular in older Australian series.

A subtrope is the Triage Tyrant. Compare Orderlies Are Creeps, for other hospital staff you don't want to cross. Also check into Bedlam House, where all the nurses are like this.