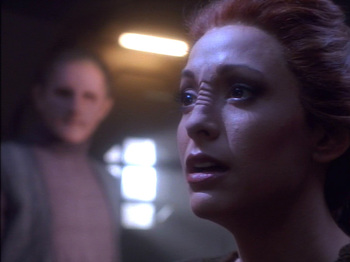 Unusually for Trek, this is a Noir Episode, complete with some disturbing revelations.

Security Log, Stardate: 47284.1. In this job, there is no "unfinished business". This assault on Quark reopens a five-year-old murder case that I've never, not for a moment, closed. Patience is a lost virtue to most; to me, an ally.

A Bajoran woman hires Quark to recover an item on Deep Space Nine, which leads to the reopening of an old murder case, from the days of the Occupation, involving Odo, Gul Dukat, and Kira Nerys.