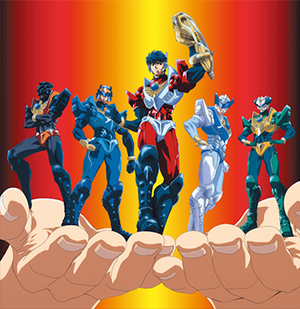 Did you know that a huge evil power that is plotting to rule the universe is approaching the earth!? But to prevent the Earth invasion Five Heroes with huge powers in their small bodies descended to earth! These warriors are called....
— Opening Narration for the first half the series
Advertisement:

Microman's only known anime series, produced in 1999 by Studio Pierrot and aired for 52 episodes on TV Tokyo.

One spring day, a small package is delivered to Kohei Kuji, a school boy. When he opens the box he finds five small action-figures inside. To his surprise, they begin to move around and start to talk to him. They introduce themselves as "Microman", coming from the planet Micro Earth which is located at the far end of the universe. They start to explain about their mission, telling him that Earth is now in danger. There is an evil power, call Acroyer, who is conspiring to conquer the universe. The five Microman are sent by the mysterious Professor K to Kohei to save Earth.

For the Marvel series based on the American rebranding of the original Microman toys, check out Micronauts.