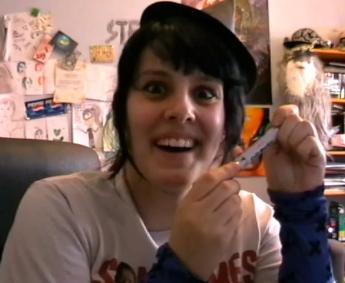 Due to her enormous popularity, the German radio station You FM took notice of her and offered Coldmirror her own category on their website where she reviewed new computer games ("Game Checks") twice a month.

She even had her own TV show: Starting from October 2010, the small station Einsfestival was broadcasting "Coldmirror - The Clip Show" once a month. The 10-minute Clip Show was modelled very closely on her Youtube channel and included Gag Dubs, Game Checks, parodies of commercials and Misheard Lyrics. The last episode was broadcast in 2016.

After the conclusion of her TV show and her animated series Japanoschlampen, she started her new animated webseries StarStarSpace for funk.net.

. Her parody of the first HP movie can be found in English here

. As the original contains loads and loads of untranslatable inside jokes (many of which cannot be understood by anyone other than her close friends and internet stalkers) and German teenagers tend to be bad English speakers, you should really check it out if you speak some German.