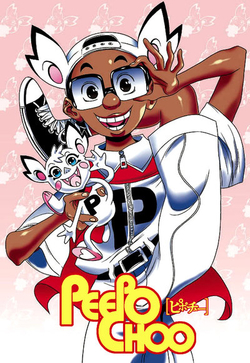 Peepo Choo is a satirical manga by Felipe Smith. It's notable for being one of the first manga series ever to be written and drawn by a mangaka from outside East Asia, but first published in Japanese by a Japanese publisher. It was serialized in the Seinen magazine Morning Two for its run, and then collected in three volumes.

The series is a rude and ultraviolent satire on US-Japanese mutual cultural misunderstanding. African-American otaku Milton is a crazed fan of the anime and manga series Peepo Choo, and is wildly overjoyed when he wins a trip to Japan in a raffle at his local comic shop, believing that the country is nerd heaven. His boss at the comic shop, Jody, despises Milton but hopes that Milton's command of Japanese will help him get laid by hot Japanese girls. What neither of them know is that the whole trip is an excuse for their boss Gill, who has a secret life as international hitman and unstoppable killing machine "Fate", to do a hit.

In Japan the characters are mirrored by Reiko, a cynical teenage gravure idol fed up with her work; Reiko's otaku girl friend Miki, who found solace in obscure interests despite being bullied; "Rockstar" Morimoto, a psychotic gangster obsessed with his own idea of African-American gangsta culture (and Fate's target); and Aniki, Morimoto's boss who hired Fate to kill Morimoto.

Not unexpectedly, things get messy.