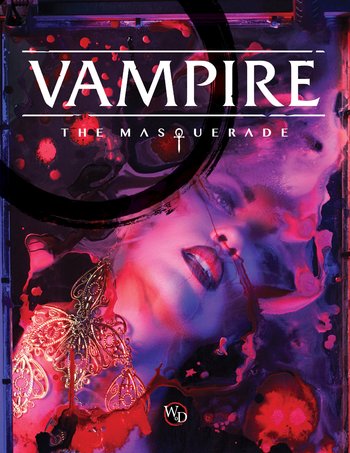 You need to feed.
Advertisement:

Vampire: The Masquerade 5th Edition is the first release by White Wolf since their acquisition by Paradox Interactive before being handed off to Modiphius Entertainment. It is an update of the setting from Vampire: The Masquerade 20th Anniversary and brings the game into the 21st century. Development of the new game was led by Kenneth Hite.

The premise of the game remains the same as its predecessor: vampires are real and live among us, pretending to be human. The player character is one of their number, having been turned and cursed with a hunger for blood as well as uncontrollable rage. Vampires have a secret society called the Camarilla which battles for control of humans and each other with many different factions. They are one of 13 Clans and each possesses unique powers. Every vampire must maintain a certain morality, called Humanity, or they will degenerate into a vicious wild animal. Vampires called the Sabbat forego this struggle and embrace their inner monster.

Changes to the setting brought about by 5th Edition include the discovery of vampires by world intelligence agencies. Rather than reveal their existence to the public, they have founded the dreaded FIRSTLIGHT organization and begun the Second Inquisition and have killed thousands of Kindred across the globe, have captured a few alive (so to speak) to study, and are hunting the remaining through the use of modern technology and semi-independent cells of human sleeper agents. This event has shaken Kindred society to its core, and the Camarilla has decided that even more draconian measures must be taken in upholding the Masquerade to ensure their survival, and has taken to enforce these rules under the strict threat of excommunicating everyone who just steps slightly out of line. These measures have not been welcomed by all, however, with some seeing them as the leaders of the Camarilla using the Inquisition as a convenient excuse to strengthen the grip on their power, which has caused everything from angry murmurs, to outright rebellion in the Camarilla's ranks, most prominently in the Brujah leaving to join the Gangrel in the Anarchs, which has experienced somewhat of a resurgence in spite of the trying times. This has of course not gone unnoticed by the Camarilla, and the centuries-long conflict between the two sects is heating up once again and is about to reach a fevered pitch.

Mysteriously, the eldest among vampires are summoned to the Middle East in an event called the Beckoning. The Sabbat, sensing the arrival of the Antediluvians, have journeyed there in large numbers to slay these Elders and search for their ancient enemies. But meanwhile, the difficult times for vampires in general have not gone unnoticed by the Sabbat's leading clan, the Lasombra, and with the Second Inquisition having toppled many of their old strongholds and still breathing down their neck and the Sabbat severely weakened as a result, some of their more radically-inclined leaders are starting to consider if maybe these highly unusual times call for even stranger bedfellows...

In the meantime, due to the many Kindred that have fallen to Inquisition, the so-called Thin-Bloods (also known as the "Duskborn") has risen to greater prominence and grudging respect in the eyes of the Elders, as their numbers are now directly needed to fill in the gaping holes in the ranks. While still seen with quite a bit of suspicion and condescension by the "truer" Kindred, especially from the Camarilla who still doggedly refuses to let them into the organization (though they don't mind exploiting them for dirtier kinds of work), they are no longer the embarrassing secret they used to be, and due to their limited ability to withstand sunlight and the discovery of a new power unique to them, these former outcasts have the chance to become powerful players in their own right.

The edition was controversial for choosing to play up the darker elements of the setting and was accused of sometimes being insensitive to real-world issues. After the release of The Camarilla sourcebook, which included a chapter about the Chechnyan persecution of homosexuals, the edition became international news. Paradox Interactive absorbed White Wolf Entertainment after this and declared it would be releasing 5th Edition exclusively through licensing deals from that point on.

Onyx Path Publishing licensed the Chicago By Night setting to produce the 5th Edition of that supplement. Its Kickstarter can be found here.

Comic books set in the setting:

Books set in the setting:

Video games set in the setting are:

It also has a number of official Web Video playthroughs: