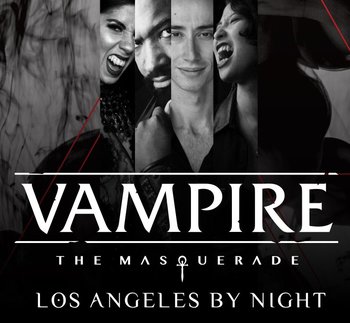 L.A. By Night is a web video series created by Geek & Sundry that follows a group of players during a game of Vampire: The Masquerade 5th Edition with Jason Carl as the Storyteller. It was originally shown on Alpha and Twitch before gradually being released on YouTube. After three seasons on Geek & Sundry, the remaining two seasons were published by World of Darkness.

The premise of the series: three vampires have been granted domain over Griffith College when a series of anemic students appearing in the clinic clues them into the presence of a "poacher" on campus. Investigating, they meet a fourth member of their coterie and become involved in a conspiracy that threatens the stability of the Anarch Free States as well as their own freedom.

The player characters consist of:

Two more were added to the main cast in Season 4:

The story ended on October 29, 2021. In June of 2022 the sequel was announced: New York by Night, starring Aabria Iyengar, Alexander Ward, Joey Rassool, and Mayanna Berrin, with Jason Carl returning as Storyteller.

LA by Night provides examples of the following tropes: