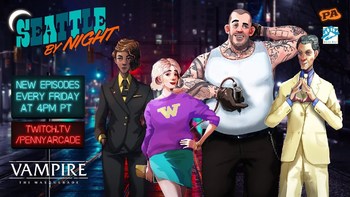 Seattle by Night is a web video series created by Penny Arcade that follows a group of players during a game of Vampire: The Masquerade 5th Edition with Jason Carl as the Storyteller. It was originally shown on Twitch before gradually being released on YouTube.

The premise is four vampires are forming an impromptu coterie at the behest of the Ventrue Elder Fionrenza. After a failed mission in Montreal, they have been sent on a mission involving a mysterious trunk and a torporous elder.

The player characters consist of:

It is the Spiritual Successor to LA By Night and even makes several references to it. It is a good deal sillier with the player characters making many more out of character jokes and pop culture references.

Seattle by Night provides examples of the following tropes: