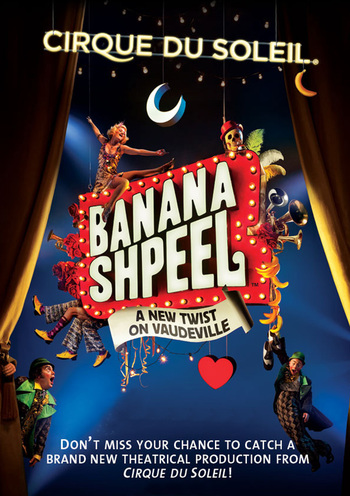 This Cirque du Soleil production formally opened in New York City in 2010; if one goes by official premiere dates, it is the twenty-eighth show in the canon.
Advertisement:

Unlike most Cirque shows with their fantasy-based plots, this is a Variety Show set within the colorful, broad trappings of old-time Vaudeville. It's presented as the latest production of producer Marty Schmelky, with dance numbers (tap and modern), showgirls, acrobatic specialty acts...and lots of slapstick comedy — more than he, his assistant Margaret, and his comic underlings expected. A trio of oddballs took the stage at the beginning of the show for an audition, and they don't want to give it back...

This show (directed by David Shiner, who helmed KOOZA), Cirque's first for traditional proscenium theaters as opposed to custom-designed ones, had a hellish time of it. It went through two extensive retools on its path to opening in New York, resulting in a months-long delay and lots of bad press. By the time it opened at the Beacon Theater, Cirque was competing with itself with the tent tour OVO's run in the city and the newcomer closed two months ahead of schedule. After an abortive Toronto run, a North American tour was scuppered, rendering this Cirque's first out-and-out failure among its live shows.