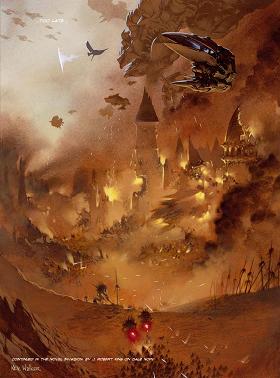 From the Invasion comic

”This is where we belong. There is no vessel I’d rather sail, and no crew I’d rather command. There is no enemy I’d rather fight, and no world I’d rather defend. We took the fight to our enemy’s command post, and then his stockpiled fleet. Now it seems he is returning the favor. Now our home is under attack, or more specifically, my home – Benalia. Phyrexia comes to our world in force. Their goal is no less than the destruction of all nations and the extinction of all species. The invasion has begun!”
— Gerrard Capashen
Advertisement:

Consisting of Invasion, Planeshift and Apocalypse, the Invasion Cycle by J. Robert King is the Grand Finale of the Weatherlight Saga. Returning to Dominaria after their adventures on Rath and Mercadia, Gerrard and the rest of the Weatherlight crew find their homeworld under attack by the Phyrexians. They are the first line of defense in a global war against the invaders, while Urza assembles a team of nine planeswalkers to infiltrate and destroy Phyrexia itself.

After this cycle, Magic: The Gathering largely returned to shorter storylines, usually spanning only a single block. The first such story is the Odyssey Cycle, taking place a century after the events of the Invasion Cycle.

Tropes in the Invasion Cycle: