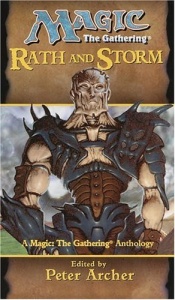 The Weatherlight Saga is the most ambitious storyline Magic: The Gathering has ever told. The game was still young and most storylines, while mostly taking place on the same world – Dominaria (with the notable exceptions of Arabian Nights, which took place on Rabiah the Infinite, and Homelands, which took place on Ulgrotha) – ran through one or two sets at most. The Weatherlight Saga ran for four years and eventually encompassed thirteen sets, while also having links to past storylines. Furthermore, cards in the set depicted many events from the storyline, to the point that it was possible to arrange them into a storyboard

. Rath and Storm chronicles the first act of the saga, corresponding to the expansions Weatherlight and those of the Tempest block (Tempest, Stronghold and Exodus).
Advertisement:

Gerrard Capshen is the heir to the Legacy, a collection of artifacts he must use to defeat a mysterious evil known as the Lord of the Wastes. After the death of his friend Rofellos, Gerrard turned his back on his destiny, leaving the skyship Weatherlight and its crew behind. However, his former crewmates have come to his home Benalia to get him back. Their captain Sisay has been abducted by Volrath, ruler of the shadowy plane of Rath, and Gerrard is asked to lead her rescue. However, behind Volrath lurks an even greater evil...

This book is somewhat infamous among storyline fans for its constrained structure. It is set up as an anthology, with each chapter written by a different author and told from a different character’s point of view. It also has an insane amount of story to tell, corresponding to four expansions. As such, there are times where it reads more like a summary than an actual novel. Readers are advised to also pick up a copy of the comic Gerrard’s Quest, which covers many of the same events, but goes into more detail about things that Rath and Storm skims over, such as Crovax’s tragic backstory.

Rath and Storm is followed by the Artifacts Cycle (consisting of The Brothers' War, Planeswalker, Time Streams and Bloodlines), a prequel revealing the origin of the Weatherlight, the Legacy and even of Gerrard himself. The storyline then goes back to the present, picking up where Rath and Storm left off in the Masquerade Cycle. Then comes another prequel before the story concludes with the Invasion Cycle.

Tropes in Rath and Storm: