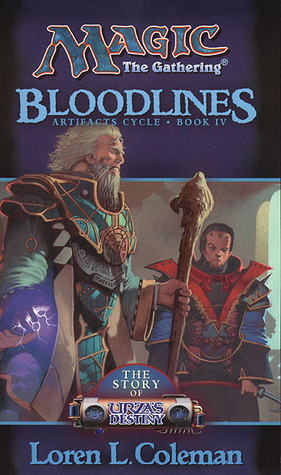 Bloodlines by Loren L. Coleman is the fourth and final book in the Artifacts Cycle, following Time Streams and corresponding to the expansion Urza's Destiny. Urza has constructed his ultimate weapon the Weatherlight and the rest of his Legacy, but he has come to realize that his efforts will be worthless without an heir. He initiates the Bloodlines Project, an effort to manipulate the bloodlines of Dominaria’s human population. Meanwhile, Phyrexia is making its own preparations, constructing the artificial plane of Rath.
Advertisement:

By the end of this book, the stage has been set for the Weatherlight Saga, chronicled in Rath and Storm and onward.