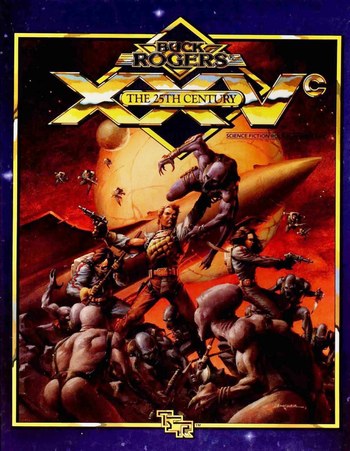 TSR's fourth Sci-Fi RPG, after Metamorphosis Alpha, Gamma World, and Star Frontiers. It was based on Buck Rogers, and used a variant of the second edition rules of TSR's own Dungeons & Dragons. It was first published in 1990, with a number of tie-in novels, video games, and board games, and lasted until about 1993.
Advertisement:

The game took what was perhaps a surprising hard sci-fi approach, given the original source material. The setting was limited to the solar system, there were no aliens, and the technology described was much less extreme than what is seen in many other incarnations of the character. It was effectively a retelling of the Buck Rogers universe, with some of the same characters and basic ideas, but it was not a direct sequel to any prior stories.

In 1993 the game line ended with the production of the High Adventure Cliffhangers Buck Rogers Adventure Game, which did tie back in to the comics continuity and ignored the XXVC universe.