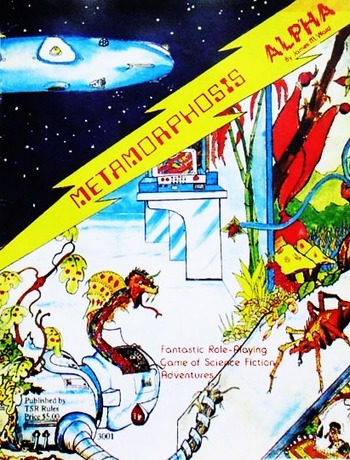 TSR's first entry into Science-Fiction Role-Playing, and possibly the first science-fiction role-playing gamenote Ken St. Andre's rather more obscure Starfaring is said by some sources to have beat it to press by a couple of months. Metamorphosis Alpha was first published in July, 1976. Later editions have been published by James Ward, the original designer, including a 25th anniversary edition and a re-print of the original.
Advertisement:

The setting is the generation ship Warden which flew through an unexplained radiation cloud that killed off the crew and most of the colonists. Over hundreds of years the ship's surviving colonists have lost most knowledge about their technology and have mutated into strange new forms of life. The players create human and mutant characters that explore their world, and possibly eventually take control of the Warden.

The game's rules set is a variation on the original edition of Dungeons & Dragons, with different attributes and character options but very similar combat rules. The biggest departure is that there is no Class and Level System and there are no real provisions for character advancement other than gathering treasure and followers together.

James Ward, the designer, has said that his inspiration was the Brian Aldiss novel Non-Stop.

This Game Contains Examples of: