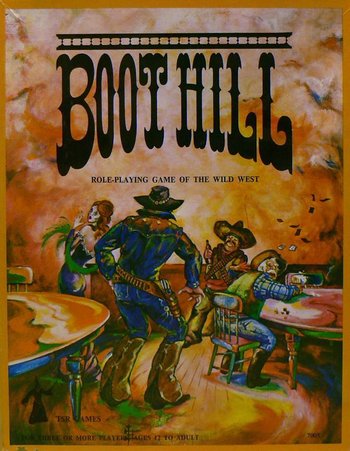 Boot Hill is a Western-themed role-playing game designed by Brian Blume, Gary Gygax, and Don Kaye, and first published in 1975. It was TSR's third role-playing game after Dungeons & Dragons and Empire of the Petal Throne, and taking its name from the Wild West term for "cemetery". Marketed to take advantage of America's love for the Western genre, Boot Hill did feature some new game mechanics, but its focus on gunplay rather than roleplay and the lethal nature of its combat system limited its appeal. It was issued in three editions over 15 years, but never reached the same popularity as fantasy-themed role-playing games.

Not related to the 2014 Boot Hill Heroes and its sequel, Boot Hill Bounties, even though they are also set in the Wild West.

Tropes associated with this tabletop game: