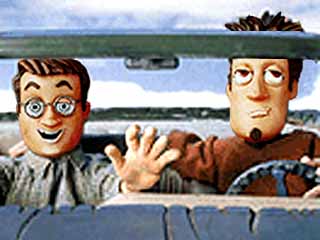 Gary and Mike is a 2001 Stop Motion animated comedy that aired on UPN, though has also been seen on MTV, Comedy Central, and Adult Swim. Interestingly, it was made by the same people who would later found the Laika company, who would go on to make the Coraline film adaptation, ParaNorman, and The Box Trolls among other works.

The story follows Gary, a rather nerdy fellow who's setting out on a roadtrip to follow the "Lewis and Clark trail", an apparent tradition in his family as they are descendants from Lewis himself. A fact his military-retired father makes very clear the importance of the trip and what would happen to Gary if something should happen to the SUV he's loaning him for the trip. Just as Gary is starting out of the neighborhood, his friend, Mike, a slacker and a playboy, is trying to avoid the wrath of Officer Dick, the father of a girl he just slept with. Gary picks him up and Mike decides to join him on the trip. However thanks to Mike's actions, the SUV gets stolen and stripped, along with their provisions. To apologize, Mike uses some of his money to buy a crappy but barely working convertible and they decide to blaze their own trail rather than face Gary's father. What follows is oddball misadventures as the duo make their way across the country with no particular destination, all the while being chased by Officer Dick.

Only 13 episodes were made of the series and it ended on a Cliffhanger.

Gary and Mike has the following tropes