Literature / Night on the Galactic Railroad 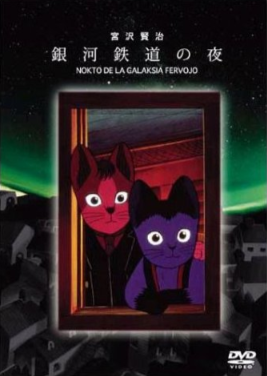 "I'm not sure what happiness really is."
Advertisement:

Night on the Galactic Railroad (銀河鉄道の夜, romanised Ginga Tetsudou no Yoru) is a 1927 novel by Japanese children's book author Kenji Miyazawa. Considered a classic in Japan, it has since been adapted into an animated film and numerous stage plays. Night on the Galactic Railroad is a Mind Screw tale peppered with a good bit of religious symbolism, but it's that special kind of Mind Screw — the kind where you can actually understand things if you give them a good bit of thought.

A boy named Giovanni, while going to get milk for his mother, decides to take a rest under the starry sky... and suddenly finds himself aboard a magical train. His best friend Campanella happens to be riding with him in the same car. The train in question is traveling along The Milky Way, heading for an unknown destination.

The 1985 film changes all but a few characters from humans to anthropomorphic cats, apparently, to honor the author's belief in reincarnation. Also, to honor Miyazawa's love for Esperanto the film was alternatively named Nokto de la Galaksia Fervojo. All signs and "chapter titles" in the film are also in Esperanto. There was a decent English dub released in 2001 starring Veronica Taylor and Crispin Freeman, but was out-of-print for a while, and the DVD was nigh-impossible to find for less than 70 USD. But not anymore! Discotek Media has announced a DVD and Blu-ray release for 2015.

Not to be confused with Galaxy Express 999.

The animated film provides examples of: