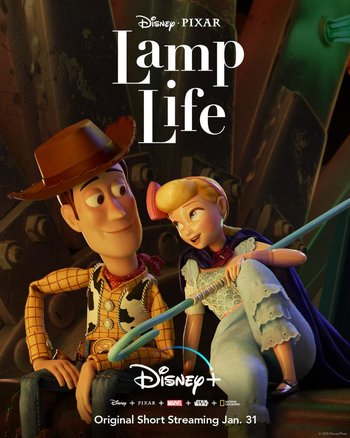 Lamp Life is an animated short produced by Pixar and set in the Toy Story universe. It is exclusively available for streaming on Disney+ since January 31st, 2020.

It chronicles the story of what happened to Bo Peep (the porcelain baby lamp figure and Love Interest of Woody) between the time she was donated and her meeting Woody again during the events of Toy Story 4.

The flashback retelling by Bo is actually made of deleted scenes from Toy Story 4, which were repurposed in this short, with the aftermath of Toy Story 4 (after Woody left the gang to live as a lost toy with Bo) as Framing Device.